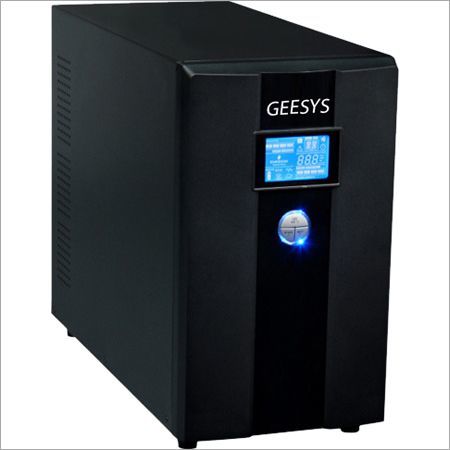 The GEESYS power system is an inverter but also contains a powerful smart charger. It is an extremely good choice for utility back up power, provide a pure sine wave power to all equipments. However, it also can be used as a UPS for computers.An inverter, charger and switching box can be replaced with a single Home series unit These are for essentially computer type loads where the back up required may be 30 min to four hours. PCU is a Solar Power Conditioning Unit (PCU) which uses Solar energy (primary) and also the power from grid (secondary), to charge the batteries.

Since usage of power from grid is secondary, grid power is only used when solar energy is not present and battery voltage level reduces to a certain level.n a line Interactive UPS (earlier known as OFFLINE ups), the load is connected to the mains supply which is stabilized directly. The moment the power fails the load will be switched over to the output of the inverter. There is a definite switch over time in Offline UPS which can be between 5ms to 20ms. Upto 20ms, interruption in power will not be felt while using the computer because the SMPS input capacitor, will supply power to the computer. Line Interactive UPS is a variant of Offline UPS. In a Line Interactive UPS there is only one transformer which, when the mains is present is used for stabilization of output and also delivers power for charging the battery. When power fails the function is reversed and used as INV transformer. This kind of a design reduces the overall cost and also is more efficient. It must be noted the inverter remains OFF when usable utility power is available